If you enjoy reading this blog, you may also like to read the articles I write each week as the Springfield Genealogy Examiner and as the Ozarks Cultural Heritage Examiner. Be sure to subscribe so you don't miss a one. You may also enjoy reading my Dr. Bill Tells Ancestor Stories blog. You can also read about the family stories in my novels at The Homeplace Series blog. You can sign up for e-mail reminders. 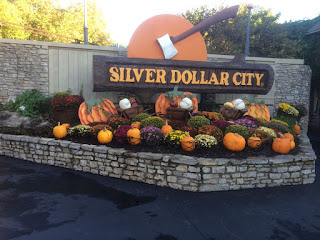 We called to reserve an electric cart, a few days out... the only day available was 'tomorrow' - so we got up early and went...

We got one of the first half dozen handicapped spots up by the entrance, so Nancy could walk. We got to wait about 15 minutes for the front entrance to open... quite a few vendors/employees came through while we waited. Nancy was first in line: 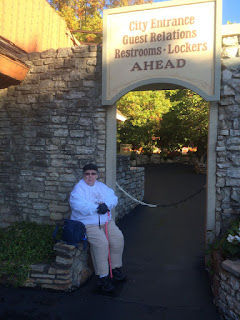 It was about 55 degrees when we arrived. She said the sweatshirt, hat and gloves felt real good!! ;-)

We were the first one to check out the electric cart... obviously a lot came after us... they were all over the place during the day. Also, lots of personal carts, as well. More cases where both members of a couple had carts. There was even one set of four folks roaming together... they took up a lot road room!!

We had breakfast, looked around all the crafts booths on the top level. Many "Made by Missouri Hands" craftspersons' booths. Pretty decent variety. As 10 am approached, we were ready to go down the hill. Here they raised the flag prior to the 'opening whistle!' 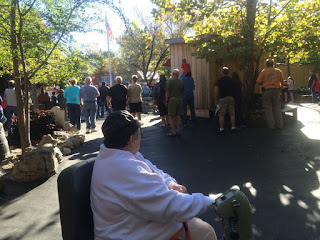 Later on, we got to Nancy's favorite Jewelry booth... they've been there for over 25 years... 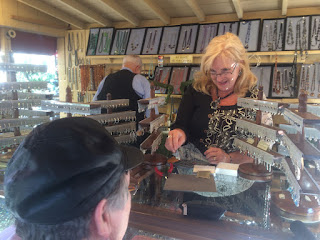 And, as you probably saw on Facebook, she bought one!! 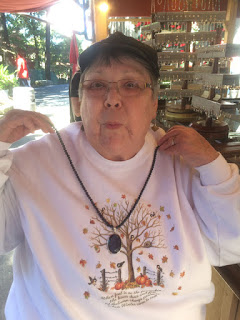 I should also mention that Nancy brought along some ear-rings she had bought at the other Jewelry store, last spring, I think. They needed repair, which they said to always bring in, if needed. She did, and they fixed them. Neat! ... and bought so new ones, of course! ;-)

It was a good day! Nice to be able to get back out the Silver Dollar City!!

Now Available in Print and Kindle

You may NOT use the contents of this site for commercial purposes without explicit permission from the author and blog owner. Commercial purposes includes blogs with ads and income generating features, and/or blogs or sites using feed content as a replacement for original content. Full content usage is not permitted.

Dr. Bill (William L.) Smith
I have stories to tell. Blogs are one of my tools; see below. If you find a common interest, I invite you to become a "follower." Also see Google Profile: http://www.google.com/profiles/billsmith2003